Just added to your cart

Stop Panicking Your Way Through Greenside Bunker Shots. Fix These Three Common Mistakes and Discover an Easier Path to the Green.

Nothing puts the fear of God into a golfer like the greenside bunker shot. You know the feeling. The ball lands in that bunker and you’re scared to death because you have no idea how to get out of there.

Here’s the good news. The greenside bunker shot isn’t all that difficult if you understand a few key concepts.

I’m going to share the three mistakes you’re probably making in the bunker. More importantly, I’ll explain how to fix those errors, and I’ll share a drill to help you approach your shots with the right mindset. 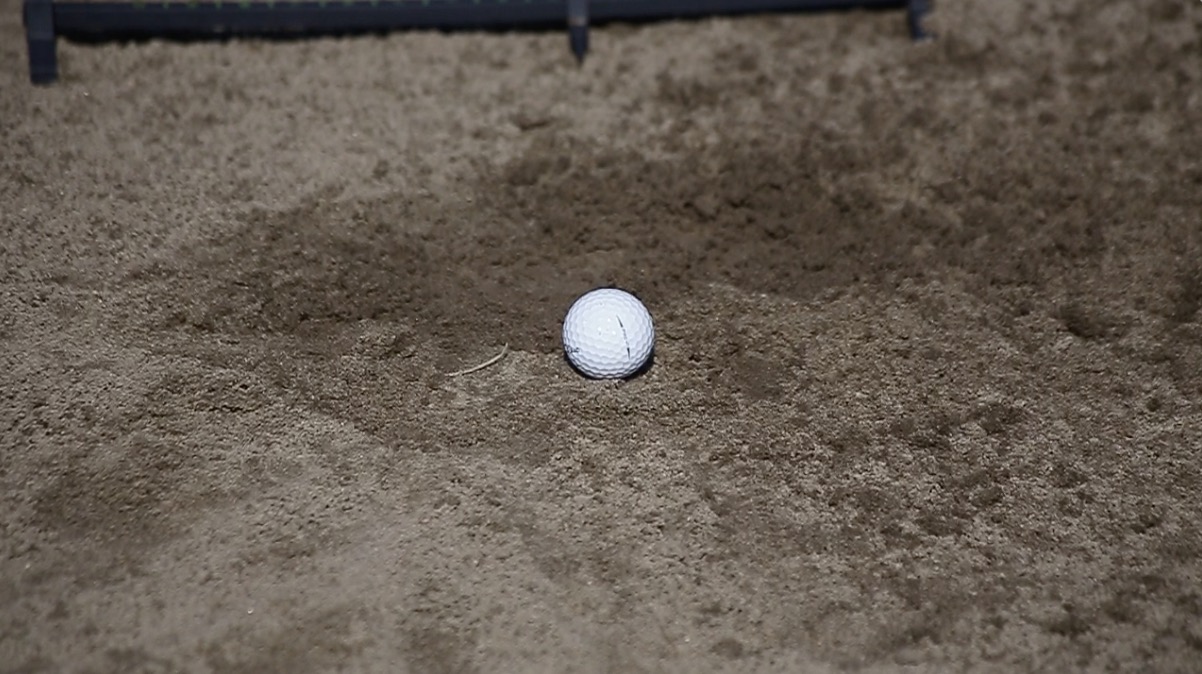 Get familiar with these simple tips, practice them, and look forward to finally mastering your bunker shots.

I’ve seen it a million times. So many golfers play the ball in the middle or slightly back in their stance. For a greenside bunker shot, that’s too far back.

When you’re trying to escape the bunker, the key is to focus on throwing sand. Don’t worry about the ball. The sand carries the ball with it.

But if you have the ball too far back in your stance, you’re only going to make contact with the ball. This makes getting the golf ball out of the bunker significantly more challenging.

The simple fix here is to position the ball slightly forward in your stance. 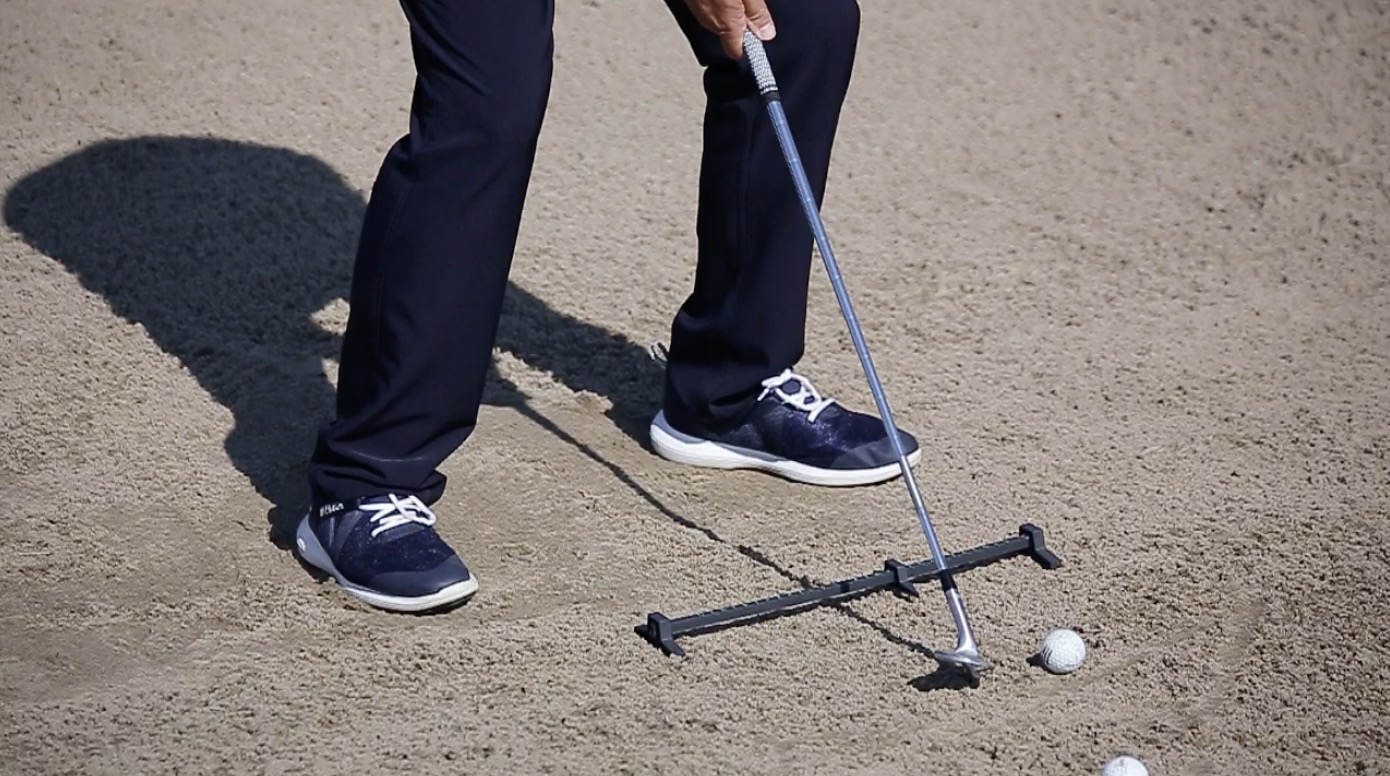 When I work with my students, I like to use the Rimer Short Game Trainer to help train their eyes for correct ball position. This tool consists of an alignment ruler and a sliding chip to help you master your stance. I use this trainer to teach everything from putting stroke to ball position for wedge shots. And it’s just as helpful for greenside bunker shots.

If you use the Rimer, adjust the slider so it’s just slightly forward of center. That’s where your ball should be. Align your feet with either end of the ruler.

Then, take your shot. You should throw some sand and get the ball up on the green where it belongs. 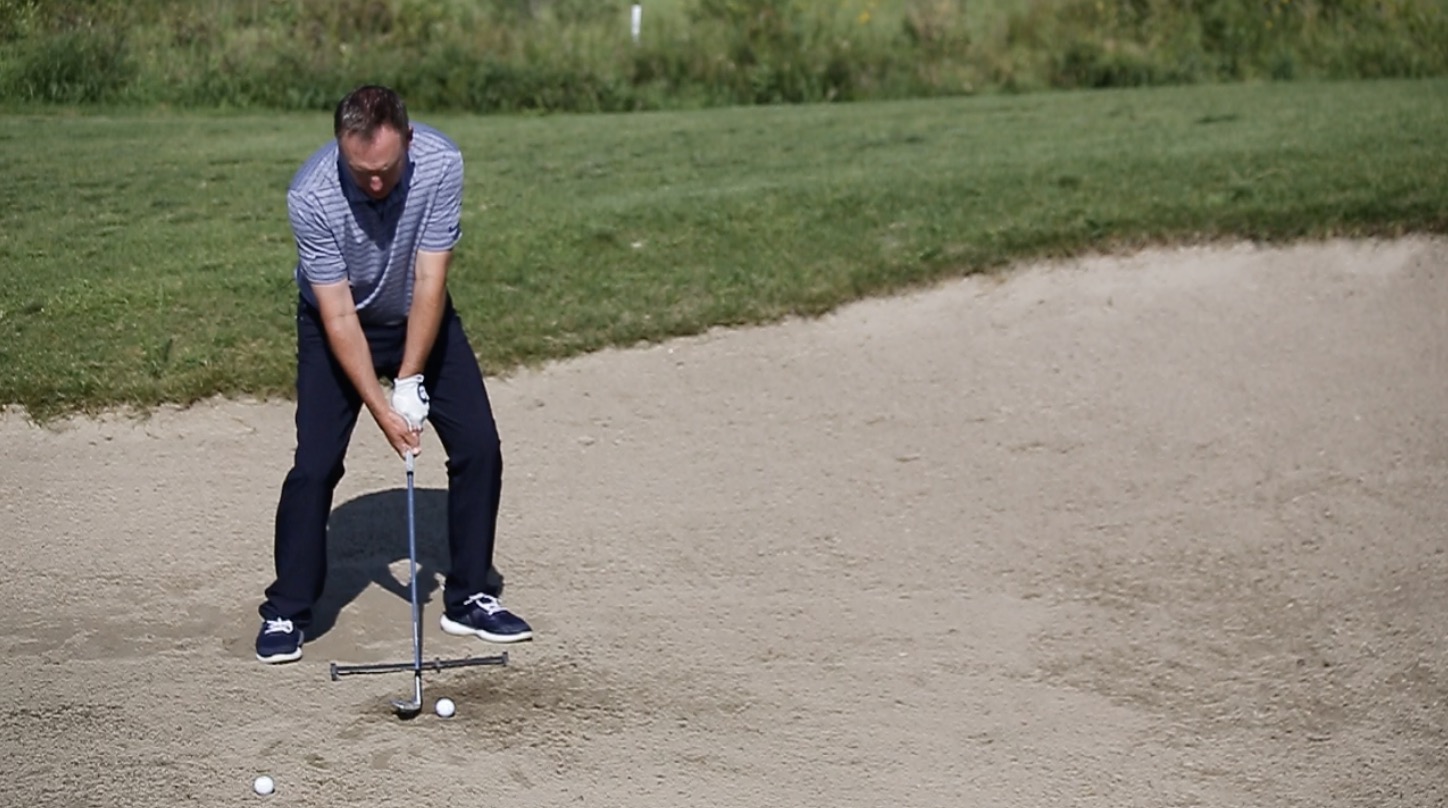 #2: Your Swing is Too Short for a Greenside Bunker Shot

If you’re like a lot of golfers, your swing on those greenside bunker shots is way too short.

Listen, I get it. The bunker is a scary place because you have to get enough momentum and lift to get the ball out of there. But you don’t want the ball to go too far, so your instinct is to hold back a little. 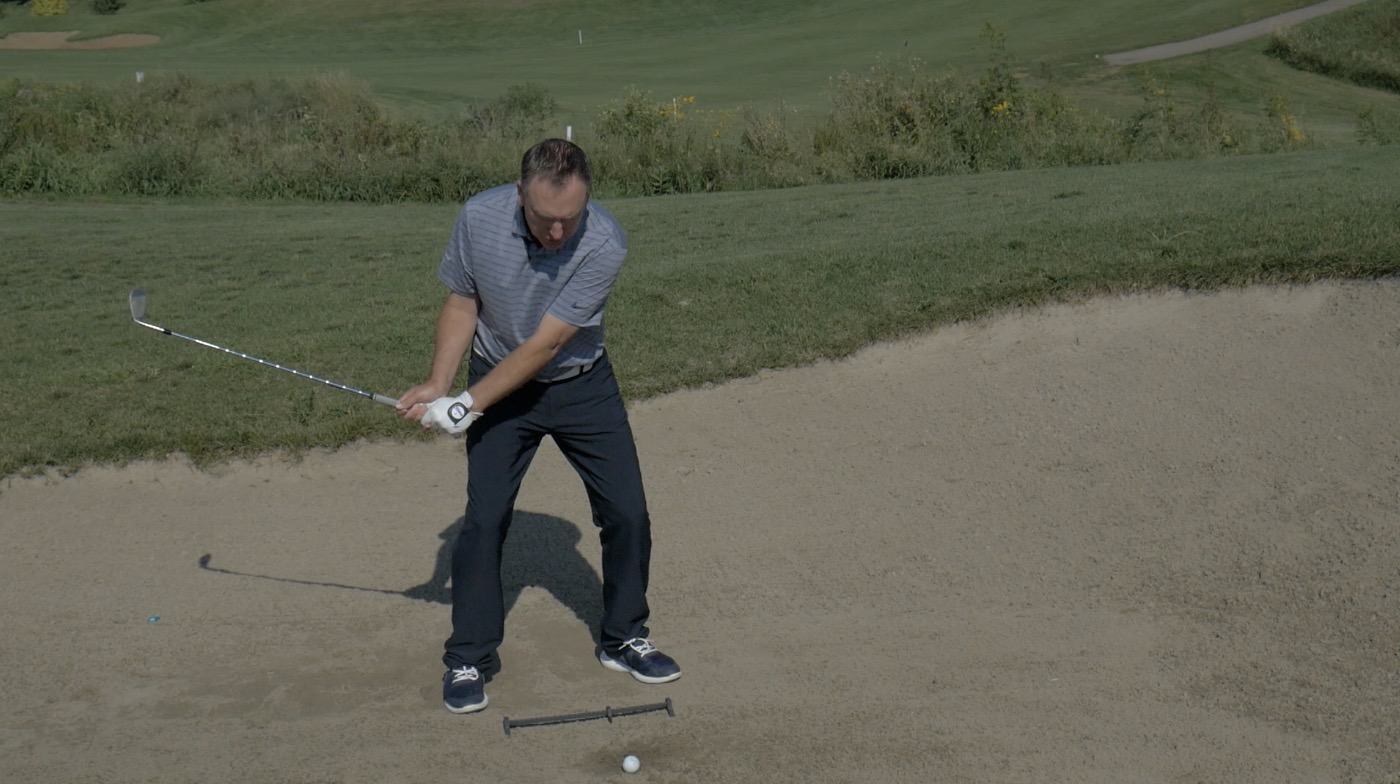 But trust me on this. Your short backswing is keeping that ball in the bunker.

This one is easy. Take a bigger swing.

I know it won’t feel right, but practice a few big swings in the bunker and see if it gets you better results. Then drop by the comments section and let us know how it went.

#3: You Have the Wrong Pressure Distribution in Your Feet

I saved the most common mistake for last.

I think this greenside bunker error is probably so common because foot pressure isn’t talked about much in golf. But I’m a huge believer in the importance of pressure in the feet. Getting this seemingly insignificant detail right can completely transform your golf game. 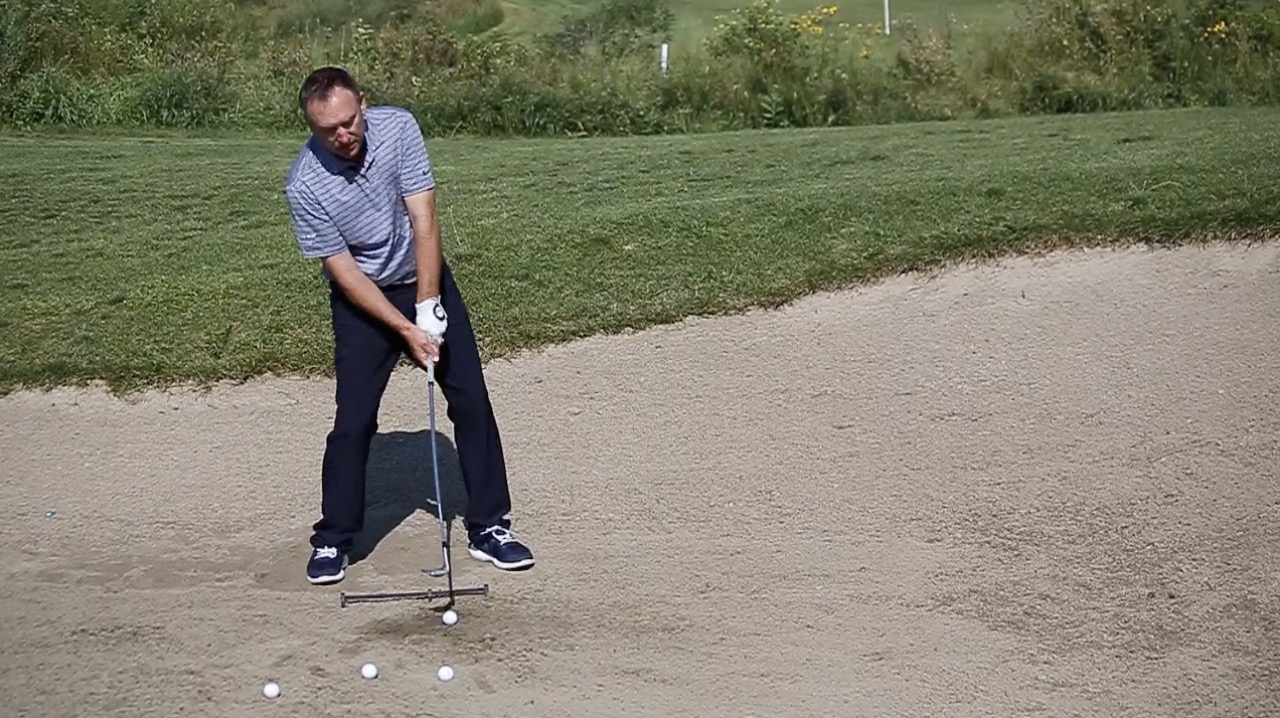 Now, most golfers get their foot pressure wrong in one of two ways.

One, they start with most of their pressure on the trail foot and leave it there throughout the swing.

Or, they start with more pressure on the lead foot but shift pressure back to the trail foot through their swing motion.

Either way, they hit the golf ball right into the lip of the bunker. 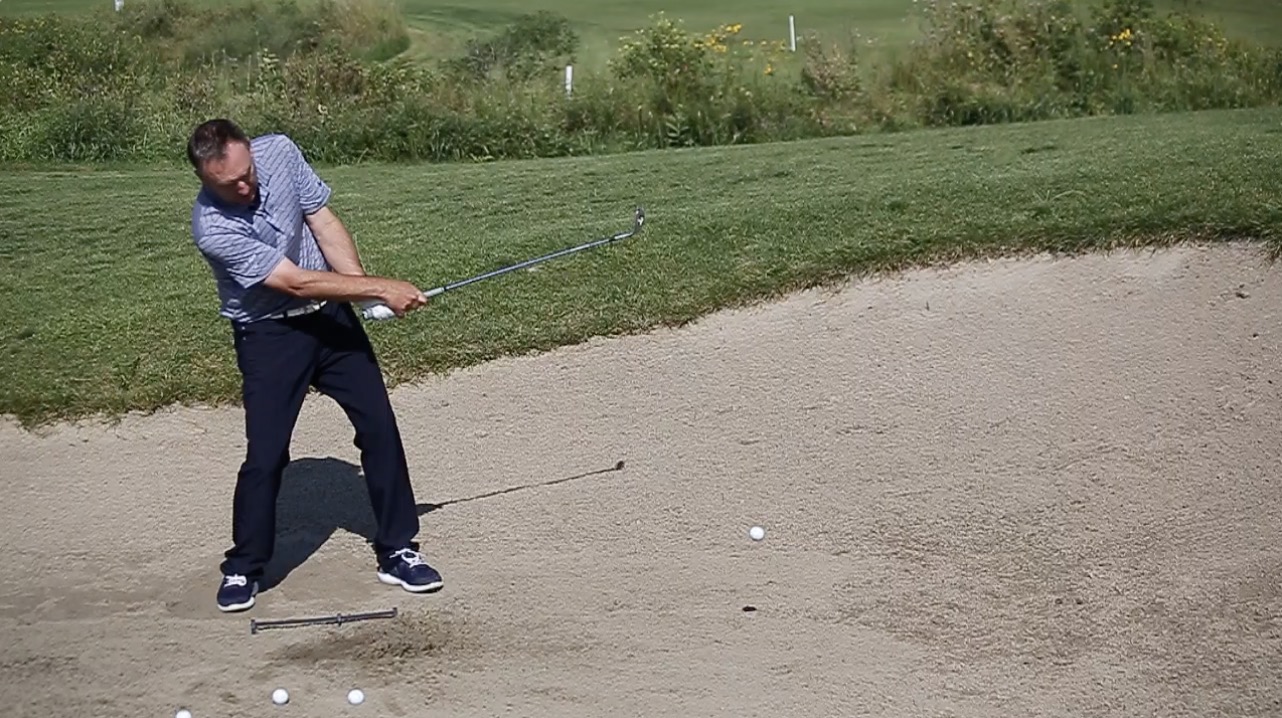 If you want to nail that greenside bunker shot, start with most of your pressure on the lead foot. By “most,” I mean about 80%. Then, maintain that pressure distribution through the entire swing motion. Do not shift back onto the trail foot.

This may feel unnatural at first, but if you can make this adjustment, you’ll pop the ball out of there for a nice, high, soft shot every single time. 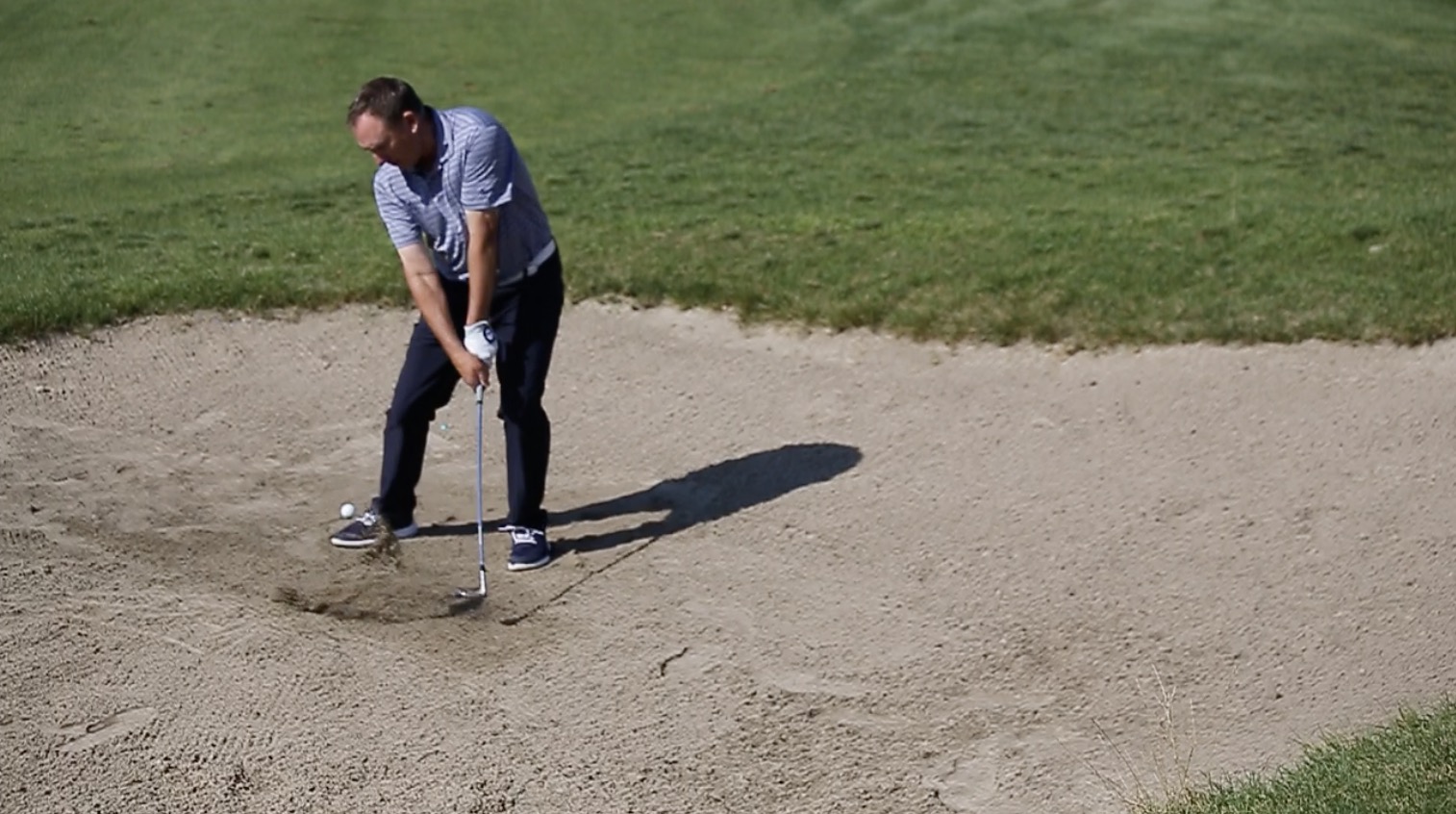 How to Hit a Greenside Bunker Shot

Now that we’ve discussed the faults and fixes, let’s take a moment to get you in the proper setup.  Your bunker game is about to thank you.

For starters, let’s take a look at club selection.  You can play a pitching wedge or a gap wedge in the bunker (less angle on the golf club actually works better for wet sand).  But we suggest a higher lofted wedge, especially due to the next step.  Grab a sand wedge or lob wedge, and you are going to take a stance that is shoulder width apart.

Next you want to rotate the club face open, keeping your hands in a neutral position, but also adding loft on the face.  Play the shot with your stance slightly open to the target or hole, flaring your toes out a bit. You will also want to squat down a bit in your stance, butt low to the ground with a neutral grip. 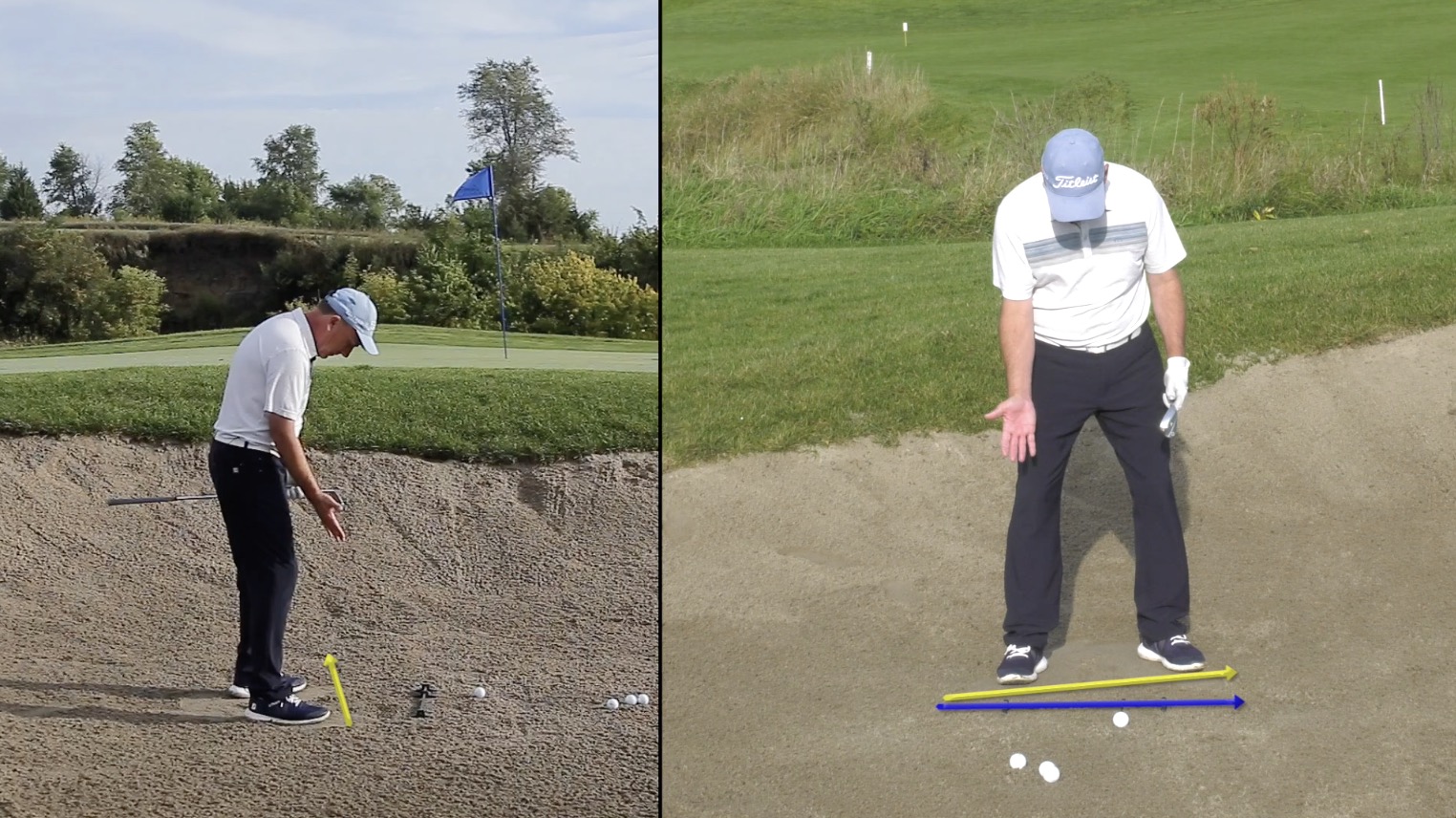 Position the ball slightly forward in your stance, since you want your wedge to hit the sand behind the ball.  When making the actual motion, keep the club head out in front of the body, so your swing path is straight back and through.  Your wrist angle should be pretty neutral, giving you a shallow backswing and follow through.

Remember, it is not like a normal pitch shot where you hit the ball then take a divot.  Instead, feel like club splash or bounce through the sand.  Keep that clubhead speed going through the shot, hitting the sand just behind the ball and popping it out onto the green.  And just like that, you have mastered the greenside bunker shot!

Now that you know how to fix your biggest bunker mistakes, let’s wrap this up with a quick word about your state of mind as you approach this type of shot.

I’ve mentioned that you want to think about throwing sand onto the green rather than focusing on hitting the ball. It can be difficult to get into this state of mind after you’ve taken several shots that were all about the ball.

That’s why I recommend using the Dollar Bill Drill to get in the right headspace. I promise, it works every time. 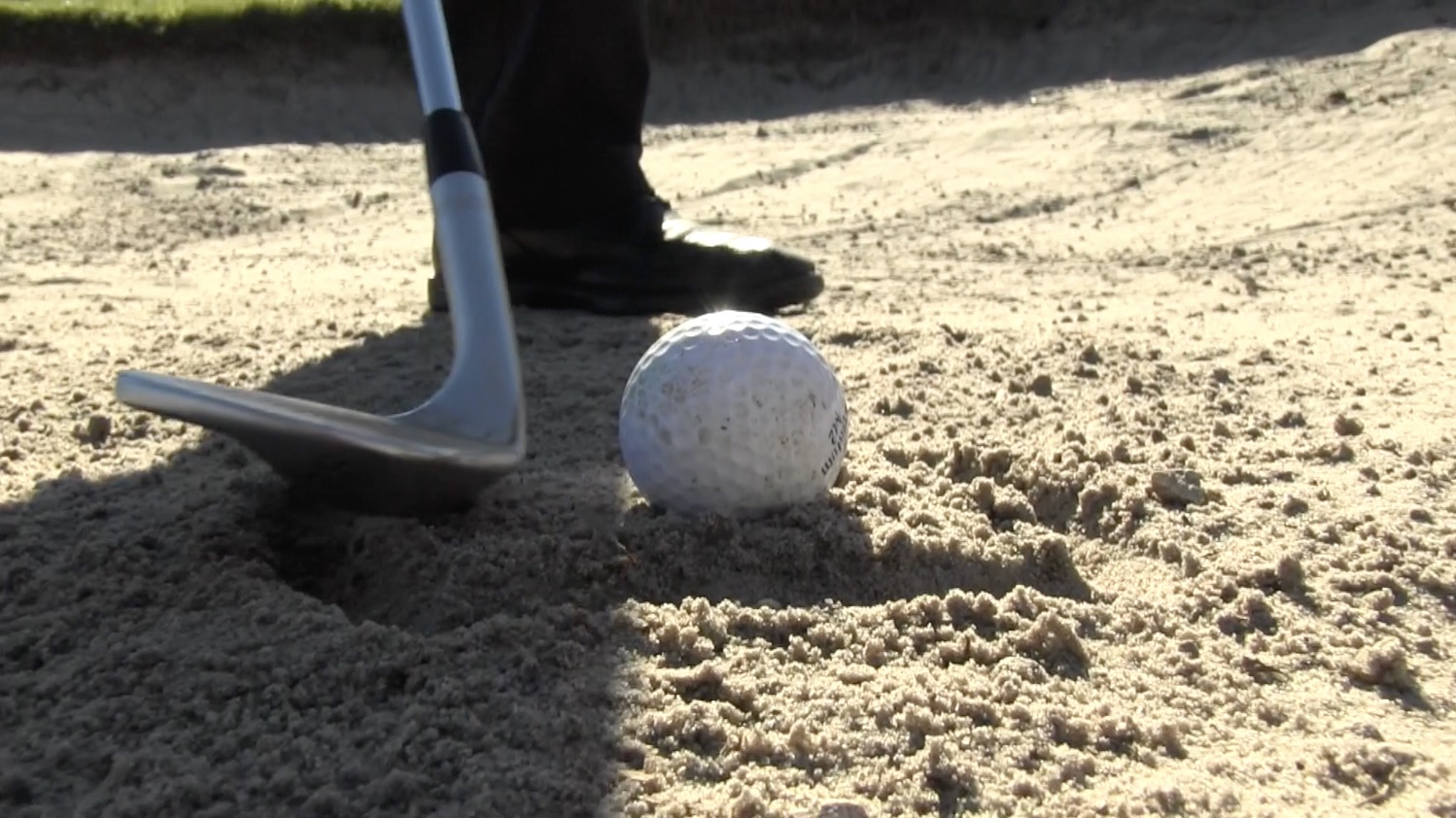 It almost sounds too simple to work, right? But this drill accomplishes two things.

First, it helps you focus on throwing sand by providing a clearer visual.

Second, it takes away the fear of the bunker shot. You’re not worrying about the ridiculous challenge of scooping that ball out of there without losing control of its distance beyond the bunker. Instead, you’re thinking about moving that dollar bill. When the fear goes away, you’re looser and more focused.

You may even go so far as to enjoy making a greenside bunker shot.

More Tips for Escaping the Bunker

Was this helpful? If you have any questions, comments, or differences of opinion, please join us in the comments and let us know!